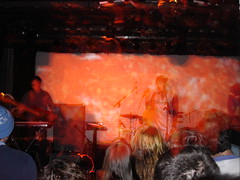 Exploding Plastic Inevitability
Originally uploaded by rpkrajewski.
A few nights ago, I saw Broadcast and Gravenhurst at the Paradise. What they have in common is that they are the “guitar bands” on the Warp label, which is known mostly for techno/electronica/what-have-you.

Gravenhurst were OK, I guess; yet another in a line of sincere and intermittently interesting bands that have followed in the steps of Slint, but end up sounding, half the time, like rock and roll with all the pop hooks, fun, chaos, and/or sex taken out (choose up to four).

I haven't really had a chance to the listen to the Broadcast album yet; the big change is that turmoil during the recording of the new Tender Buttons album reduced the lineup to a duo. However, they are a four-piece band on this tour.

You might think that Broadcast's most recognizable features (the sometimes “naive” melodies, the motorik beat, the shimmering noise and fuzz in the production of the previous albums) would result in a mannered sound live, but instead there was a calm intensity to the rhythms, and sometimes the drummer would really let loose on tracks like “Pendulum.” For me, Broadcast's blend of pop, experimentalism, and beats was just the ticket.